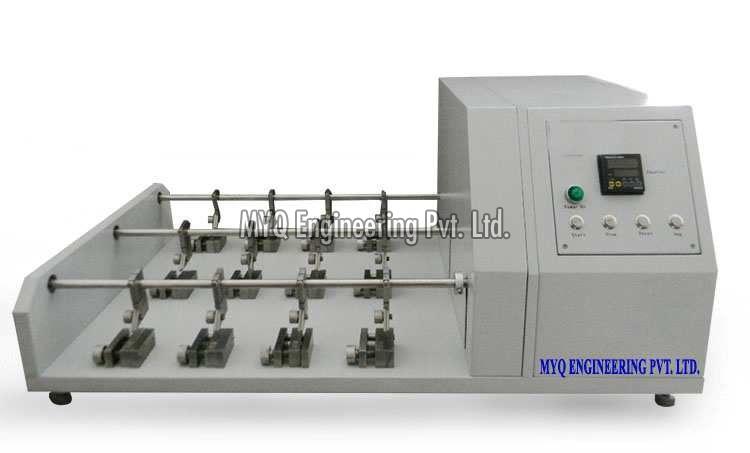 The flexometer is the internationally-accepted method for the assessment of the flexing endurance of light leathers and their surface finishes. The tendency for cracks to form in the creases caused by walking can also be determined. The Bally flexer has a different flexing mechanism to the vamp flexer and is complementary to it. It is also used to precondition samples prior to determining water vapour permeability - particularly in assessing uppers for protective footwear. The Ability of light leathers and leather–cloth used in manufacture of shoe uppers. Gloves, and garments to withstand repeated flexing without cracking is determined with the help of a flexing endurance test in this test specimens in shape of rectangular pieces are folded and clamped at each end to maintain them in a folded position in a set of grip s, one of which is fixed while the other is able to oscillate. The movement of the oscillating grip causes the fold in the test specimen to run along its center. This operation is carried out repeatedly and the test specimens inspected periodically to assess the damage produced. The equipment used for this is called as Flex-o-meter.

The twelve stations are conveniently arranged for user access and the mounting of samples. A predetermined counter is fitted to the machine, allowing it to be operated without continuous attendance as the machine stops automatically once the set count is reached.

The equipment with either 6, 12 working stations are also available.